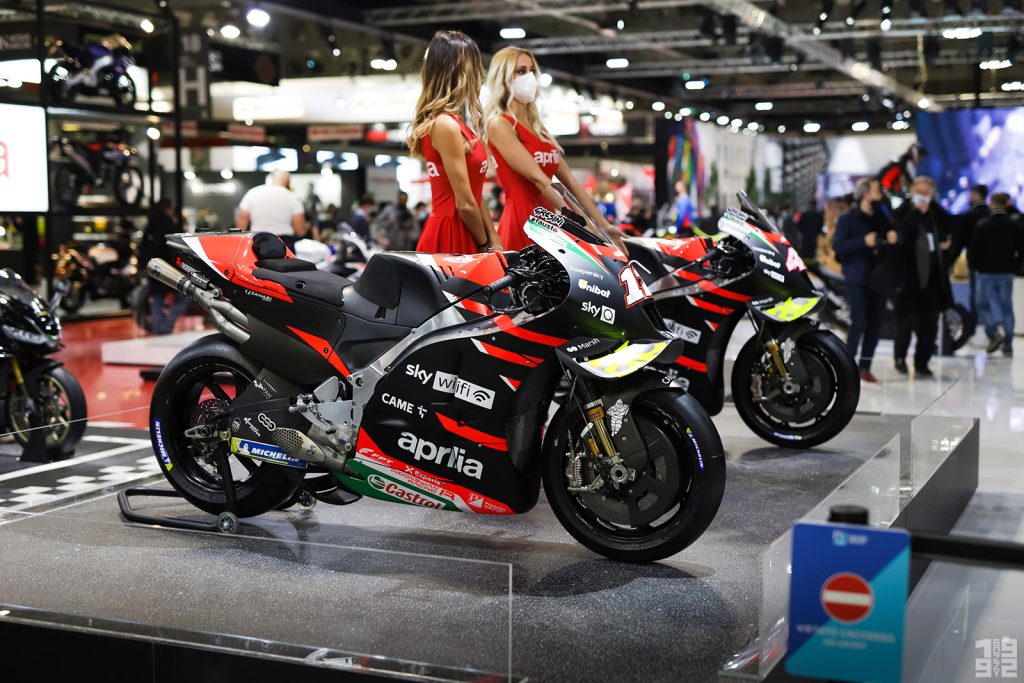 After a year of mandatory break due to the pandemic situation, the 78th edition of EICMA (also called ‘Milan Motorcycle Show’) took place regularly even with some notable absences among the manufacturers. Thanks to a huge public participation I must admit I forgot of this terrible period for a couple of days, seeing thousands of people in the exhibition complex.

Even if I’m a crazy petrolhead, I’ve always been passionate for anything with an engine, wheels and sound, and obviously I couldn’t help but be fascinated by the motorcycles world. The curious thing is that I’m slightly disoriented when I think the most important two-wheeler exhibition on the globe is just 30 minutes far from my home. It doesn’t seem real to me, every time. But I’m getting used to it, year after year.

I take advantage of this exhibition mainly to stay updated on the latest products and news of the two-wheels world, such as new street superbikes, but also to capture my favourite ones: old racing icons from the past.

The stand that catches my attention the most is the one of the Italian MV Agusta. I’m not much into bikes as I am with cars so I don’t know if their bikes are great to ride or not. However every time I’m fascinated by their style and build quality when I have one of their products in front of my eyes. That’s the case of the new Superveloce Ago, a limited edition MV Agusta Superveloce which pays tribute to the legendary Italian rider Giacomo Agostini.

Another MV motorbike that intrigued me was the Rush 1000. This was the upgraded 2021 model of the brand’s 2020 hyper-naked featuring an over-the-top look, inspired by the aeronautical world, and exotic materials. Only 300 copies will be made. And I’m an absolute fan of that carbon/aluminium rear wheel!

A big novelty among superbikes was the concept SR-C21 presented by CFMoto. The Chinese brand has an important joint venture with KTM since 2011 and this concept may have much in common with the RC8 superbike of the Austrian manufacturer. Very few details have been unveiled but it’s possible the SR-C21 may feature KTM’s LC8 engine, which is now exclusively manufactured in China under CFMoto’s name.

Another interesting bike unveiled during this year Eicma was the Bimota KB4, together with its equivalent naked version, the KB4 RC. Since 2019, Kawasaki purchased a 49% stake in the Italian company with the intention to manufacture Bimota bikes using parts from the Kawasaki supply chain. After the Bimota Tesi H2, the KB4 is the new project derived from the collaboration of the two companies.

Regarding the KB4 RC, it’s basically the same bike but without the front fairing. ‘RC’ stays for ‘Race Café’ to further indicate it belongs to the genre of Café Racer sport motorcycles. Thanks to that absence the innovative high-pressure cooling system is more visible, where the radiator is housed diagonally between the leather seat and the rear wheel (as introduced on the first Benelli Tornado).

2021 has been an important year for Moto Guzzi since it was the 100th anniversary from the birth of the Italian company based in Mandello del Lario, on Lake Como in Italy. For the occasion they unveiled the V100 Mandello, an innovative Roadster-Tourer motorbike for the brand which is the first Guzzi powered by a new liquid cooled yet traditional 90° twin cylinder V-engine.

Another curious feature of the V100 is being a motorcycle with active aero: two movable wings placed in the upper area of the tank which should improve stability and air penetration. It’s still unclear whether they will rise automatically as speed increases or mechanically based on the will of the rider.

EICMA wouldn’t be EICMA without all the beautiful hostess and models posing for photographers and visitors during the whole 6 days of event. And despite the pandemic situation, this year exhibitors have requested them in large numbers.

But the ‘Milan Motorcycle Show’ is not just a static event. On the outside area there are various dynamic activities from simple test rides to actual races or shows. These last activities are held in the MotoLive arena which includes an actual dirt motocross track, freestyle trial and another area dedicated to the crazy guys of freestyle motocross (FMX).

As I have already told many friends, I really enjoyed taking some pictures in the MotoLive arena. Being too used to the same subjects and settings during the whole year (in my case cars on race tracks), I found it very stimulating and challenging to photograph some action with motorcycles, jumps and dirt.

For sure I won’t forget the crazy stunts of the Riot Riders team. But seeing those jumps, flips, etc. frozen in static images make me want to produce some videos next year to better save those moments.

Back inside the exhibition, I must say that electric cycles are growing exponentially year after year. Compared to the automotive world, this phenomenon seemed to me still mainly focused on urban mobility, but sooner or later it’ll affect all types of bikes. For now I’ll still happily enjoy those internal combustion engine rockets!