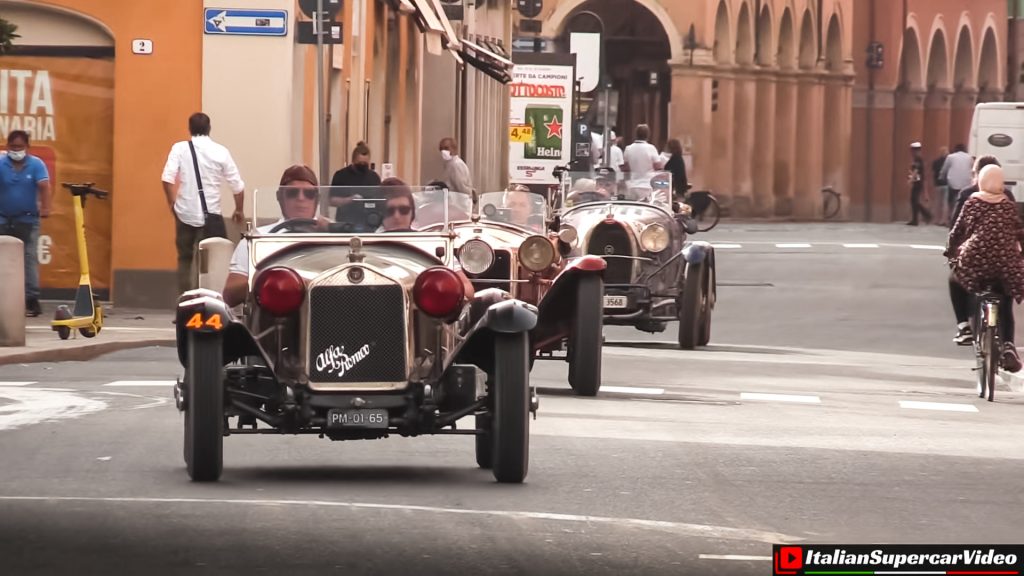 Finally, the 1000 Miglia 2021, I couldn’t wait for it to return! The route (Brescia–Rome round trip) is similar to that of the original race, maintaining the point of departure/arrival in Viale Venezia in Brescia and it’s divided into sections to be covered in a few days.

The Mille Miglia was one of the most famous open-road endurance competition held in Italy between 1927 and 1957. Since 1977it has been reborn as a regularity race for classic and vintage cars, produced no later than 1957, which had attended (or were registered to) the original race.

For the occasion, I decided to film the historic cars in the right context, the superb town of Fontanellato (Pr).

This is the first day of the race; the cars have started from Brescia and will arrive in Viareggio, following the classic Giro d’Italia in the opposite direction. More than 400 cars were welcomed by the local population in the wonderful old town dominated by the lovely medieval fortress whose construction began in 1124, when the Pallavicino family had the first tower built for defensive purposes. The structure was completed in the 16th century. Fontanellato itself reflects the characteristics of a medieval village. Definitely worth the trip! After the touristic parenthesis, talking about cars, we could admire beauties such as Alfa-Romeo 6c 1750 and 8C 2900 Botticella, Bugatti T35 and T37, Lancia Lambda, B20, B24, Mercedes 300 SL Gullwing, Bentley, Austin Healey, Porsche 550 Spyder & 356, Ferrari 750 Monza, 340 America Spider Vignale, Fiat 8V, Maserati 200 SI, Osca MT4, Cisitalia and many other wonderful pieces.

The 4th and final leg of the Mille Miglia departed from Bologna toward its finish line located in Brescia. I chose the city of Modena to film the historic cars kermesse. As always, I prefer the city centre. Piazza Grande with the Ghirlandina, Piazza Roma and its Military Academy and finally the ring of the Novi Sad Park were the main points for cars, with stamps and time controls. The best vintage world production cars in this huge convoy are also the most expensive in the world for value and historical importance.

The regularity competition is followed by groups of modern supercars which pay tribute to the Italian race. The most famous is for sure the one officially organized by Ferrari, called Ferrari Tribute to Mille Miglia, which I’ve filmed on Wednesday near Parma, where the cars made their first passage during the opening day of the race. About 100 Ferrari invaded the streets including F50, LaFerrari, some 812 SuperFast and 488 Pista, 512BB, 599 GTO, Monza SP1 & Monza SP2, Roma, F8 Tributo and more. The stretch of road I chose was spectacular; many cars gave me great accelerations too.